In Cilento and Vallo di Diano Unesco Global Geopark  a geological heritage characterized by a high degree of diversity is preserved coastal and mountain areas, made up by sedimentary rocks both carbonate and siliciclastic, give rise to an articulated landscape where steep mountainous, dissecated by deep gorge, can reach rapidly the sea or relieves gradually lowest toward wide river valley.
According to Guida et al. (1980), the Cilento region can be defined as a "Morpho-structural Province", sensu Tricart (1965), which represents a sub-unit of the larger Campanian-lucanian Tectonic Region.
This area belongs to the Southern Apennines fold-and-thrust belt, which developed between late Cretaceous and Pleistocene ages as a consequence of the interaction between the European and the African plates as well as of the spreading of the Tyrrhenian oceanic basin (D’Argenio et al., 1975; Patacca et al. 1990). Due to the long-time and complex lithogenetic and orogenetic history, several litho-stratigraphical units, in form of nappes and/or irregular sequences can be distinguished. Such nappes are grouped as internal units and external units, according to the original position before the tectonic deformation. Moreover, we have to consider one the most widespread unit in the Park, represented by a neogenic synorogenic unit deposited in a basin formed on top of advancing thrusts. At last, the quaternary postorogenic deposits are depicted in order to understand the occurrence of geomorphic processes on the relieves as well as on the plain and coast, also in correspondence of climatic changes 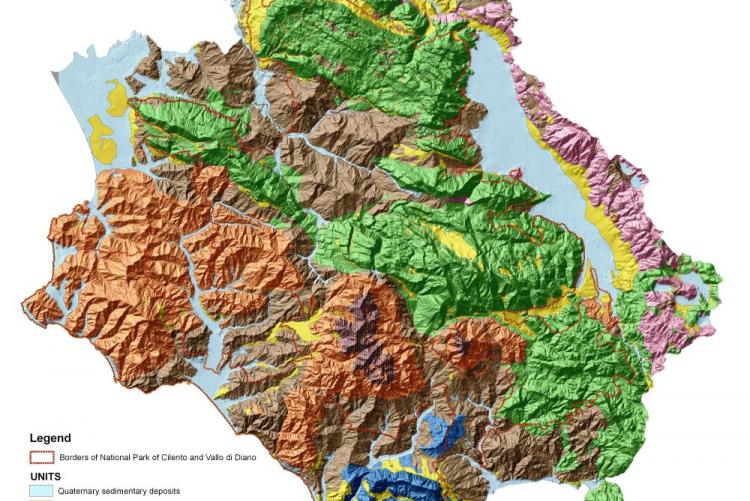